The ERC-721 is a new standard for tokens created in the blockchain of Ethereum and has as its main characteristic the exclusivity.

When a set of assets has equal values, they are defined as fungible. For example, one US dollar has the same value as any other US dollar. In the world of criptomoedas assets, fungibility promotes high liquidity among tokens within an ecosystem. When all tokens in a particular blockchain are identical, multiple transactions can occur quickly without the attendees worrying whether the tokens store the same value.

A non-fungible asset, however, is not the same as its counterparts. The example of a non-fungible asset is any kind of collectible item. A shirt from the Brazilian national team, for example, signed by Neymar will have much more value than any other official shirt.

CryptoKitties is one of the first projects built during the Beta version of ERC-721 and since November 2017 has already moved more than US$ 12 million in buying and selling, the game allows collectors to buy rare kittens that cross each other develop more and more characteristics differentiated, which consequently leaves them more expensive.

In addition to the world of collectable CryptoKitties, CryptoKitties presents another interesting side. In the future physical assets will be represented in the blockchain and the NFTs may have practical utility, land, houses or company stocks can be traced and acquired through an ERC-721 blockchain. Applications developed by Ethereum, such as Decentraland, are already building virtual worlds in which non-fungible assets can be traded between users in the ecosystem.

The success of CryptoKitties shows that people can recognize unique value and scarcity in the blockchain, and are eager to do so. 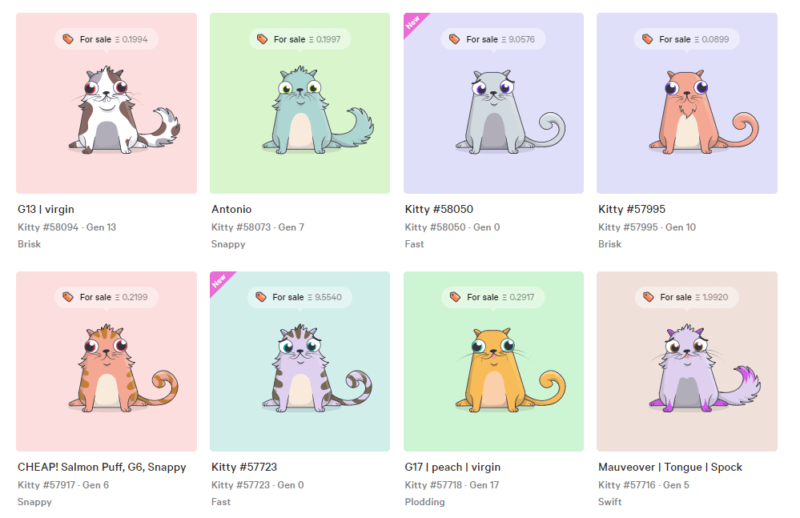